The Old Man and the C

I don’t remember the exact day, but I’m sure it was in October of 1970 when I first encountered Cannabis.  As a student at a local community college, I was invited to a sort of “get acquainted” party for freshmen at a home in West Stockbridge.  I went knowing some people who would be there had mentioned that there might be an opportunity for me to get to know the plant. We mingled and drank some beer and when it became dusk, a group of folks went out to watch the sunset over the hills, now ablaze with fall colors.

We stood in a circle, as was the style at the time, and a small pipe of hashish was passed around.  I did not hesitate when it came to me and my first impression was one of “wow, this tastes different from anything I have previously experienced”.  The pipe went around a couple of times and I found myself looking at the sky as the sunset and feeling like I had never quite seen it look that nice.  I became aware that the sunset that day looked prettier than any I could remember. I stayed for a while and enjoyed the new feeling of relaxation and heightened awareness of color and sound.

Related: Learn About Adult Use of Marijuana in Massachusetts

A Great First Marijuana Experience Leads to a Lifelong Journey 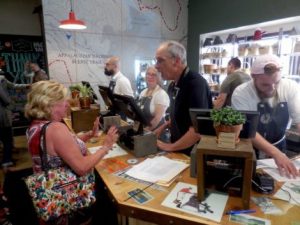 Later, I drove back to my parents’ house in Lenox and I went to my room and as I was falling asleep I thought that something significant had happened that day.  When I awoke the next morning, I felt fine. I was rested and relaxed and I went to class that day and found the folks who had shared with me. I thanked them and asked if I could possibly procure some of that wonderful substance.  Sometime later I met a gentleman in the parking lot who handed me a very small package and I gave him a small amount of money. I had taken the first steps on what would become a lifelong journey.

So, why I wondered, did I feel so apprehensive about what I had done?   Well, it was, after all very illegal. I could wreck what’s left of my life in a  moment of bad luck or making a bad decision. I struggled with this for a few days.  I went back to class and when I had a break between classes, I talked with the folks who had shared with me at that first experience.   I came to believe that IF this plant could help me, where was the harm? I decided to continue my journey even if I had to do so “underground”.

We, who pursued this path, became a sort of community in the shadows. We shared phone numbers and met and maintained a network of contacts that shared our interests and desires.  One of the guys I met at school had a friend that he introduced me to and we became good friends. Off and on, through the years we helped each other to continue the journey. All of us in this “community” had the same sort of unease about what we were doing but felt that doing this was the greater good.

Years went by, but small movements got to be larger and the number of signatures on petitions grew, and, in 2016 the People voted to legalize Cannabis.   Almost three years later and a new industry is starting to stretch.

As someone in this new industry, I embrace the opportunity to engage with people I meet about Cannabis (including people I meet at Canna Provisions).  I wear my Cannabis industry livery proudly very often. I am surprised by the number of strangers that comment on my shirt or my little leaf pin.

Vastly more people are delighted to see this new openness than are troubled by it.  A broad range of ages and occupations have said: “It’s about time!” It is, indeed, about time.  I look forward to the days when The Cannabis industry is as mainstream as any number of industries that cater to the desires of humanity to make life as pleasant as possible.  I am very lucky.

Stop by Canna Provisions Group Medical Dispensary today and discover exactly what it is that sets us apart. Located in Lee, Holyoke, and Easthampton MA.

One Reply to “First Time Smoking Weed: My Cannabis History”